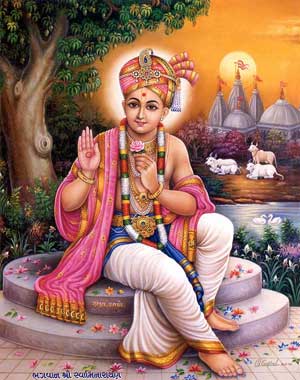 In his early years, he was known as Ghanashyam. At the age of eleven years His parents attained liberation. Seeking to lead a life of asceticism for the inspiration to the human beings, he left His home and became famous as Neelkanth because of His observance of severe austerities. In the jungles of the Himalayas He performed Tapascharya at Pulhashram. He decided to proceed to Bengal. On his way, in Nepal, he met a great Gopal yogi, who taught him yoga. In Bengal, he dissuaded the monks from performing animal sacrifices. He then proceeded to south India, then to Maharashtra and finally entered Gujarat (Saurashtra) and met Shree Ramananda (believed to be an incarnation of Uddhavji, a great devotee of Bhagwan Krishna). On His request, Shree Ramananda Swami gave Him initiation (Diksha) and thus Neelkantha became known as Sahajanand Swami and Narayana Muni.

After declaring Him, at the age of 21 years, as the spiritual head of his disciples, Shree Ramanand Swami recommended Him to protect and propagate Bhagawat Dharma or Ekantika Dharma as prescribed in Bhagawat (11th Canto) and as in Vasudev Mahatmya of Skanda Purana. After His guru’s earthly departure He gave the ‘Swaminarayan’ mantra to His followers, henceforth became popularly known as Swaminarayan. He propagated the path of Bhakti or devotion to God.

Bhagawan Swaminarayan’s preaching transformed the once turbulent Gujarat into a land of peace. As an incarnation, He tirelessly worked for thirty years and affected a peaceful revolution by establishing morality and faith.

He deplored violence, and put an end to the bloody sacrifices in yagnas prevailing at that time. He eradicated the practices of female infanticide and burning of widows (sati). He advocated education for all, including women. More importantly, he said, ’I have incarnated upon this earth, not to kill demons, but to uproot demonic elements from the human mind; not to liberate man temporarily from the poverty and pain of this life, but to emancipate him forever from the transmigratory cycle of births and deaths which lies at the root of all pain and poverty.’

Water was scarce in Gujarat. The Saints, led by Bhagwan Shree Swaminarayan, dug wells and ponds. They begged and collected food for distribution to the needy. They taught people about the glory of God, instructed them to abstain from alcohol, meat-eating, stealing and adultery.

Bhagwan Shree Swaminarayana set the five vartamans (rules to observe daily) for the saints - Sadhus to follow: Nir-Lobh (No greed), Nish-Kam (No lust), Nis-Swad (No taste), Nis-Sneh (No attachment) and Nir-Man (No ego). According to Bhagwan Shree Swaminarayan, real devotion can flourish only when one realizes one’s nature as a spiritual being, not just a physical body. To reach this high state, one’s life has to be grounded in righteousness and chastity, and have a profound spiritual association with a God-realized guru.

Brahman, also known as AksharaBrahman, is absolutely a unique reality in the metaphysical hierarchy of the Swaminarayan Philosophy. Akshara Brahman is eternally emancipated, all-powerful and omniscient. It has the nature of sat, chit and ananda, and has eternal relation with Parabrahman, both as His ideal devotee in the personal form and as His limitless ultimate abode in the impersonal form. All the four distinct categories are below Parabrahman, who is completely independent, self-existent and the highest reality.

He is transcendent, with eternal divine form and immanent. This Parabrahman is Bhagwan Swaminarayan. Ultimate liberation is achieved by attaining Ekantika Dharma.

It consists of Dharma – the ethical code prescribed by Shrutis and Smrutis (scriptures), Jnan (Gyan) – the comprehensive knowledge of jeeva, ishwara, maya, Brahman and Parabrahman,Vairagya – non-attachment to everything except God, and Bhakti (devotion) – the intense love with the knowledge of greatness and glory of God. Among them Bhakti is the leading element and other three are necessary supportive components.

This ultimate liberation is pursued under the guidance of the God-realized Sadhu. ShreeSwaminarayan enriched humanity by a tradition of sadhus, a legacy of Mandirs – Temples and spiritual centres, and treasures of spiritual and moral wisdom in two main texts: VachanamrutamandShikshapatri. Bhagwan ShreeSwaminarayan established Mandirs for the propagation of Vedic Dharma at Ahmedabad, Bhuj (Kutchha), Vadtal, Dholera, Junagadh and Gadhpur. He performed the Pretishtha of the Murties of Shree Nar-Narayan Dev, Shree Lakshmi-Narayana Dev, Shree Gopinathji Maharaj, Shree Shree Harikrishna Maharaj (His own Murti), Shree Radha-Raman Dev, Shree Madan-Mohanji Maharaj and others in these Mandirs.

Bhagwan Shree Swaminarayan left for His divine abode, Akshar Dham at the age of 49 in 1830 CE at Gadhpur, Gujarat. Before leaving His human body, in 1826 CE, He sat two acharyas of two piths; (one at each, Shree Lakshminarayan Dev Pith at Vadtal and Shree Nar-Narayan Dev Pith at Ahmedabad) as His successors.